The Québec Pension Plan – Actuarial Valuation as at December 31, 2021 and Public Consultation

On the same occasion, a consultation document entitled "A Plan adapted to the Challenges of the 21st century"2 was also tabled as part of a public consultation provided for in section 218.1 of the QPP Act, which must be carried out at least once every six years. This document initiates a reflection by proposing changes to the Québec Pension Plan “QPP” regarding both the Base Plan and the Additional Plan.

The QPP offers all individuals over the age of 18 who work in Quebec, as well as their loved ones, basic financial protection in the event of retirement, death or disability. It is composed of two plans, namely the Base Plan and the Additional Plan. Overall, the two plans aim to provide retirement pensions, which are payable without reduction at age 65, equivalent to 33.33% of employment earnings up to the Year’s Additional Maximum Pensionable Earnings (YAMPE of $75,900 in 2023). However, a portion of the retirement pensions, those provided for by the Additional Plan, will not be fully paid until after 40 years of contributions3.

Actuarial Valuation report as at December 31, 2021

Highlights of the Basic Plan’s funding

The Basic Plan’s financial indicators show that it was in good financial health as of December 31, 2021. 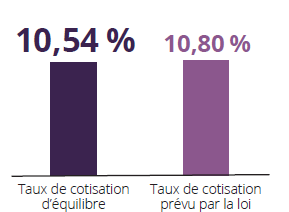 Highlights of the Additional Plan’s funding

Projections show that cash inflows are sufficient to fund cash disbursements for each of the 50 years projected (2022 to 2071)7.

The Additional Plan’s financial indicators show that it was in good financial health as of December 31, 2021.

The COVID-19 pandemic had a limited effect in the short term. The COVID-19 pandemic has caused episodes of higher and lower mortality in Quebec, especially for beneficiaries. Despite these unusual fluctuations in mortality rates, the long-term life expectancy is comparable to that estimated in the previous actuarial valuation. In addition, the contributions paid were slightly higher than those forecasted in the previous actuarial valuation.

Retirement pension applications delayed. This observation has been recurrent since 2014, the year from which no condition relating to employment is required to apply for a retirement pension and from which the adjustment factors for early retirement were increased. The proportion of people who request to receive their pension from the plan at age 60 compared to the total number of retired people of the same age has fallen between 2014 and 2021 from 60% to 36% among women and from 56% to 31% among men. In the projection, this decrease continues, but at a slower pace to stabilize as of 2031. Deferring the start of retirement pension payments represents an increase in costs for the QPP. In fact, even if no benefit is paid during the deferral period, the lifetime pension paid will be greater since the deferral period to which the adjustment factors apply is shorter. Since these factors are high, overall disbursements will be higher for the plan, resulting in higher costs.

Uncertainty related to recent events. The QPP’s actuarial valuation as at December 31, 2021 was produced in unprecedented times, namely the COVID-19 pandemic, economic and geopolitical instability and the labor market’s transformation. The uncertainty inherent in the projections, particularly those in the short term, is therefore greater than in the past. However, QPP funding is done with a long-term perspective.

The consultation document presents the good financial health of the Basic Plan and the Additional Plan as an opportunity to make changes that will have an impact on Quebecers financial security of upon retirement, death or in the event of disability.
The consultation document discusses some changes which, according to the author, are aimed at increasing financial security in retirement and others aimed at better recognizing certain life situations that can lead to a reduction in earnings such as a period of disability, a period during which it is necessary to take care of a dependent child and a period of Informal and family caregiver.

Changes which, according to the author, aim to increase financial security

The effect of the changes discussed on the basic plan’s contribution rate would almost certainly completely eliminate the margin of manoeuvre of 0.26% of pensionable earnings identified in the actuarial valuation as at December 31, 2021 or partially eliminate the latter if the adjustment factors for early retirement are modified. The effect of these changes on the reference contribution rate of the Additional Plan is proportionately less significant. It should be noted, however, that the effect on the modifications aimed at recognizing specific situations has not been quantified.

Finally, the consultation document provides a reminder of the automatic adjustment mechanisms in place in the event of a poorer financial health. It reminds that if the contribution rate to the Basic Plan is 0.1% or more higher than the contribution rate provided for by the QPP Act, then the latter will be increased annually by 0.1%. It also mentions that the benefits and contributions could be modified in the event of financial imbalance in the Additional Plan, but that the parameters of this adjustment mechanism have not yet been defined.

The public consultation on the QPP should be held quickly at the beginning of 2023. Individuals and groups who wish to do so can submit briefs to the Commission directing this consultation.

We invite you to contact your SAI Consultant for more information about this publication.

4 The steady-state contribution rate is the lowest rate that will allow the Basic Plan to maintain a constant ratio between the reserve and the annual benefits paid.

6 The contribution rate provided for in the QPP Act for funding of component 2 of the Additional Plan is four times that of component 1, i.e. 8%. This will apply to earnings above the YMPE ($66,600 in 2023), up to 7% of the YMPE in 2024 and up to the difference between the YMPE and the YAMPE thereafter.

7 The forecasted reserve at the end of the twentieth year projected (2041) according to the contribution rates provided for by the QPP Act is $169.1 billion, which is greater than the $156.5 billion value at that time of the benefits relating to the years prior to 2042.

This document is a summary, analysis and/or commentary made according to our understanding of an event. We take no responsibility for any use made by a third party.

Obtain clear and concise information written by our experts on current events that could impact your operations or organization.

Get the conversation started and find out how SAI can help you and your organization.

Speak with a consultant